Yesterday was the largest protest in U.S. history. The 2017’s Women’s March was an assembly of people gathering to tell those freshly elected[1] that they would be held to account, to be “proactive about women’s rights”, to be “a stand on social justice and human rights issues ranging from race, ethnicity, gender, religion, immigration and healthcare”.

Estimates are still fluctuating (best estimates are currently 4.7 million), but it is clear that the protest was the largest in U.S. history, and aside from pilgrimages, the second largest peaceful gathering in human history.

Even from half a block away, as I was approaching the march, it was difficult to not cry in reaction. All these people uniting for this cause. “You are not alone.” And all of them so invested. There were so many signs, almost all of them handmade. There were entire families, old people, children, babies.

Some of the signs were heartbreaking. Above you can see a sign drawn by a child perhaps of four showing that children understand what we are doing, and that what is being done is wrong.

Below, we see one of the signs which talked about intersectionality[2]. A common complaint about feminist movements is that those impacted most are women of colour and various other ‘more disadvantaged groups’, while women’s movements tend to focus on white women. This specific sign below is talking about the (very) large number of missing and killed aboriginal women:

The only real police presence (aside from blocking traffic so that the march could progress) was in front of the U.S. Consulate:

The Horsies! above made their own comment on the situation:

I like to make up stories about people that I see. My story here is that this older gentleman grew up in Eastern Europe, saw things there happen first-hand, and so has a very personal reaction to current events.

At Queen & University, I stopped to talk to J, who was counting the number of people in the march as they went by. (He’d estimated about 20,000 up to that point, later estimates were around 60,000.)

Continuing on to Nathan Philips Square (the first photo in this post), out front we ran into three young gentlemen in immaculate suits[3]. They seemed confused, so we decided this would be a useful teachable moment. We asked them if they wanted to know what this was about, they explained that they didn’t know about what was going on. ‘What was the march about?’ ‘What were their specific policy proposals?’ (They assumed it was about reproductive rights.) Interestingly, this was difficult to articulate, perhaps because that was the wrong question.[4] I tried anyway, talking about the normalization of violence against women, reproductive rights, healthcare, climate change, but feeling like I was losing them, turned back to the teachable moment that I thought would be most effective in getting them to pay attention[5]: “The main reason protests like this happen is…” “Awareness?” “Yes. The point of the hundreds of thousands of people marching in D.C. and elsewhere is to get men in suits to pay attention and change things.” (I pointed out wordlessly that they were wearing suits, and they showed they understood. We left them thinking about it.)

Their questions were good, in a way. It highlighted for me how little I had really expressed these ideas myself, assuming their correctness, not having had to explain them to people who did not agree.

One of the few signs which contained specific policy proposals:

I’ll leave you with this inspiring photo of two powerful women:

Note: There were a number of photos that I did not include because they included faces.

[1]The use of ‘elected’ is problematic, but outside the scope of this post.

[2]I’m not going to try to mansplain intersectionality more than I have here. There are far better places to learn about it than from me.

[3]From their lanyards, it looks like they were at the Ontario provincials for ‘DECA‘, “an international association of high school and college students and teachers of marketing, management and entrepreneurship in business, finance, hospitality, and marketing sales and service.”

[4]Really, we want a consultative democracy, with proper rule of law. We’re never going to get things right the first time, but talking to each other about it and actually listening will help a lot. I also think that science-based decision making is best, but proper consultation is a good step in that direction.

[5]Yes, I’m aware that the discourse has moved beyond ‘men in suits have to be convinced to make the changes, no one else can’, but if it helps a few more people think about being allies, I figured it was worth it.

[6]There is a lot of literature on this topic. Put simply, prisons are an act of violence inflicted on the people by the state. Different people have different opinions on how necessary and/or helpful this is.

When we last saw our intrepid adventurers, they had just found an incarnation of balance and harmony, then had that jarringly ripped away from them by an encounter with a MOOP sculpture:

So, a word about moop or MOOP. ‘MOOP’ is the abbreviation for ‘Matter Out Of Place’, the anti-thesis of ‘leave no trace’. It’s been an abbreviation for long enough that it’s become a word ‘moop’. Apparently, this had been a growing issue at Burning Man, finally coming to a head for 2006, when they decided to publicly measure the amount of moop left over after the event and start to name and shame:

Already you can see the difference one year later, in 2007, after just measuring and enforcement:

As is 2013, our first year at the Burn, this was the ‘norm’ we first saw, and wanted to help improve upon: 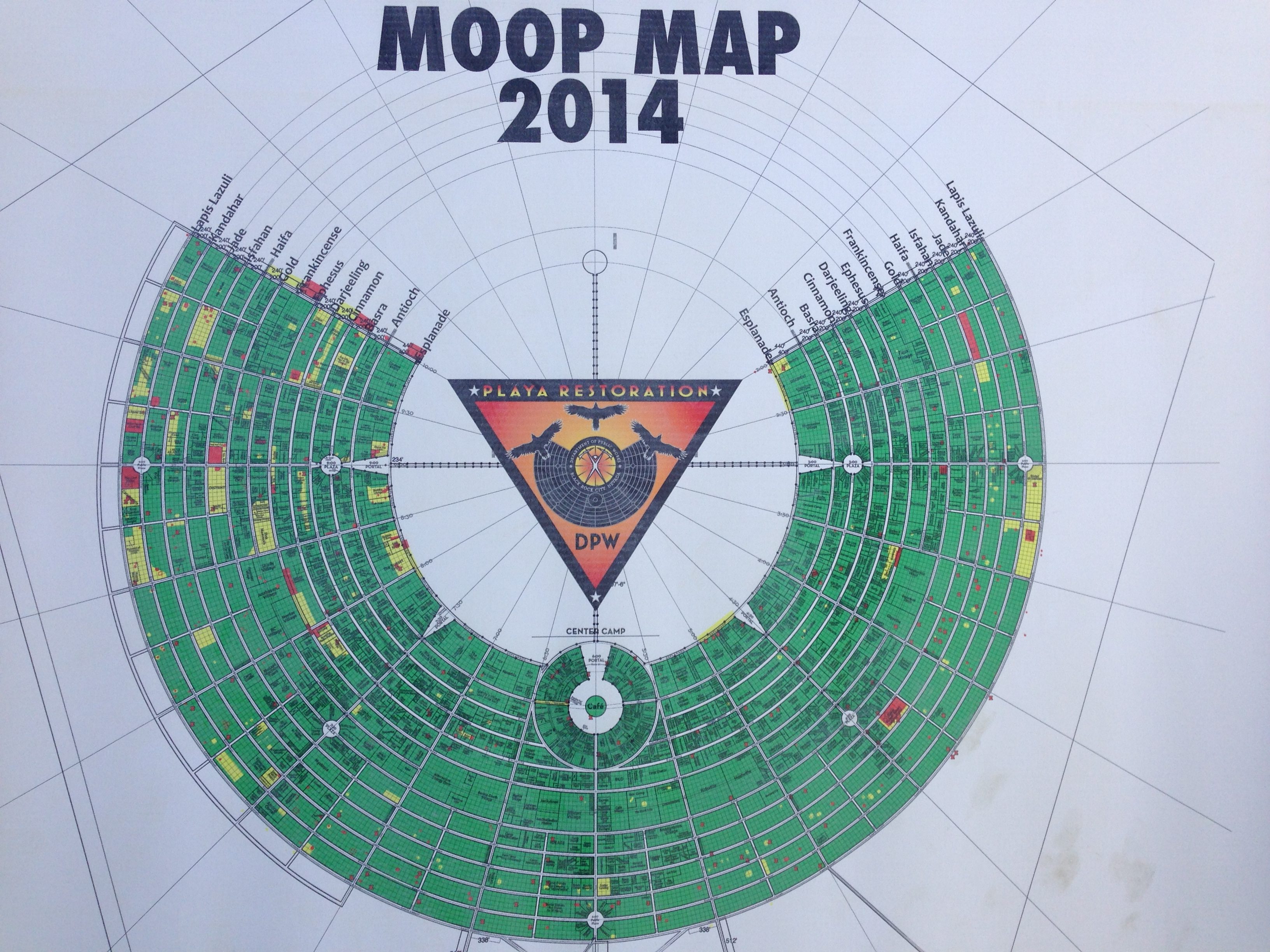 The placement map for 2015 (I have no idea what the spoon was for):

And the results from the 2015 after-event cleanup! You can see the continually disturbing red and yellow rings around Esplanade which only a very few groups were able to sweep to green status:

Next time, our plucky adventurers meet the golden rhino, and make the tiniest of fist-bumps. Stay tuned!

[1]https://en.wikipedia.org/wiki/The_Long_Dark_Tea-Time_of_the_Soul I’ve always enjoyed this particular phrase, but it feels problematic for a number of reasons in the context of the book.

When we last saw our intrepid adventurers, they had just been told by the Oracle to seek out ‘Balance and Harmony’.

Not fully understanding this command, they continued exploring the art gallery where they had found the Oracle. Equally perplexing was the whispered comment “In seeking Balance and Harmony, you shall find meaning inside and outside yourselves.”

Searching through the art gallery, like in many good art galleries, they found myriad artworks neither balanced nor harmonious:

Some where the balance had been shattered:

But eventually, they found their way Clear to find Balance:

Thus invigorated, their purpose became clear. To add to the complexity and messiness that is human creativity:

The journey within and without is the meaning inside:

So, our adventurers had found the meaning within, and had found a measure of peace. But they couldn’t shake the nagging feeling that there was something larger than them that required their attention.

They saw this piece, and it shook them to the core. The first time they had seen this type of detritus since leaving the default world, they knew what their next mission would be:

Join us next time, when our adventurers discover what it means to Moop!

When we last saw our intrepid heroes, they had just gone fishing!

Flush with success (and the blood rushing to their heads from being upside-down), they continue exploring.

Their first clue for their next quest comes from an unlikely source. A miniature Man informs them: “Your next clue requires you to possess my Visor of Seeing. To acquire this artifact, you must successfully golf me.”

Making her first attempt at golfing the ramp, S shakes her fist as the ramp thwarts her.

S tries again, but will it be enough?:

Perhaps a different angle will reduce the ramp to a more manageable incline?:

Over, around, and through! The man allows S to take her prize, the Visor of Seeing. So far, so good:

The Visor allowed S to see something unusual here. She said it was too disturbing for mortal minds to know…:

…but it directed her towards the giant robot ‘Tobor’, who told her to ‘seek the pincer’:

Unsure of what the Pincer meant, our heroes sought out the art exhibition at the center of the Black Rock City ‘Wheel’. Upon arrival, they noticed that they could now see an oracle where before there was only a blank painting:

Join us next time, as our intrepid adventurers seek out Balance and Harmony, whatever that might be!

20 years ago, I watched Contact in the theater with my family[1]. Tonight, I watched it again, with S.

To me, it held up well as a movie. All the characters were believable, and the science and the effects were well within the normal parameters of suspension of disbelief.

What struck me[2] was how hopeful a movie it was, that our better natures would win out, that our endless curiosity would take us places we’ve never imagined.

It’s always interesting the things you remember 20 years later. “Why not make two, at twice the price?” The destruction scene. The prime numbers sounding so ominously alien from the aether. The speaking through her father. The 18 hours of static[3].

Interestingly, I had remembered that 18 hours of static as being the vindication at the end of the movie, that she was not crazy, that something had indeed happened, but I had forgotten how much it was covered up.

The one (gaping) plot hole I had missed the first time around was the absence of study and testing before a human was sent through the machine. If you look at the history of the Apollo program, you see that it was preceded by Mercury and Gemini, with dozens of sequential missions, each testing new parts, to make sure that each part of the system and plan were well-enough understood to ensure successful missions. The idea that they would build a half-trillion-dollar system in Contact and not fully study it (especially if it’s generating strange EM radiation) before sending a human through it ‘strains credulity’. Even the EM it’s radiating would be a fantastic discovery for humans.

But I can understand how they would cut out things to make a move that was watchable, and which was able to spend its time focusing on the humans in the story.

The alternative view of events that the NSA directory was trying to convince people of at the end of the movie was reminiscent (for me) of the big con[4] at the end of ‘Watchmen’, albeit at the opposite end of the hope-fear axis.

Apparently, like Bladerunner, the ending was supposed to keep your doubt alive as to whether the events she experienced had actually happened. To me, it didn’t, as 18 hours of static (and whatever metallurgical data they could get from the sphere) would be enough to prove the story.

I laughed, I cried, I am full of hope. A new year dawns. Time to use that hope to build something meaningful, starting with some words.

[1]We immediately followed it with Men In Black. I’ll leave it to you to enjoy this juxtaposition.

[2]If you’d read or watched any Carl Sagan, this would probably not be surprising. “The sky calls to us. If we do not destroy ourselves, we will one day venture to the stars.”

[4]In ‘Contact’, it was posited that a billionaire had faked first contact to inspire humans to push themselves outwards. In ‘Watchmen’ (the graphic novel[5]), Adrian Veidt fakes an alien invasion to scare humans into working together against a common foe.

[5]’Watchmen’ the movie simplified the plot to have Doctor Manhattan be the scapegoat. this lead to a much tighter movie, but slightly less appropriate for my analogy, however much he played with space and time.