Scene: I’m in a conversation with two students, one male, one female, probably high school age.

The male student says: “How many feminists does it take to screw in a lightbulb?”
Me, not missing a beat: “That’s not funny!”
Female student: “Yes!”

For those of who don’t see the joke, “That’s not funny!” is often the punchline to “How many feminists does it take to screw in a lightbulb?, playing on the perception of the sense of humour of feminists and feminism*.

As it turns out, both parties took my comment at face value (which was mostly what I intended), and it turned into a small teachable moment.

*This feels like a whole long discussion, mostly sad, about how people felt that making ‘punching down**’ jokes about women no longer socially acceptable was a ‘bad thing’. I feel like much has been said about this, and I have nothing useful to add.

**Perhaps more interestingly, it feels like this whole concept was aired and discussed long before the words ‘punching down’ (meaning making fun of those less fortunate or less privileged) entered the vernacular.

The above pic came across my fb feed this morning.

Some random thoughts about this.

1) There exists this subreddit: https://www.reddit.com/r/Tenagra/ which is, in the internet way, developing a similar-type language.

3) The title of the post is somewhat ambiguous. It could be a reference to Dylan Thomas’ ‘A grief ago’, in its use of parts of speech, saying something deep about Tenagra, and the myths behind it leaving us behind on the seas of fleeting cultural memory… Or it could just be commenting that Tenagra was an island.

If you don’t understand the reference, this might help:
https://en.wikipedia.org/wiki/Darmok

A common conversation in our household:

I like to sort this with my general wont to cut Gordian knots*, but perhaps it is also useful because it allows you to reduce the problem under discussion to a well-known problem, which is known to be insoluble in very specific ways.

Perhaps we will find that the solution to the P=?NP problem is the same as the problem of regulatory capture**. I think it’s more likely that P=?NP will be solved first.

**Regulatory capture I think was first described for me in ‘Yes, Prime Minister’, as the inevitable co-option of the body which regulates an industry by the industry which it regulates. This is generally because they talk to each other the most, combined with the huge financial incentives. 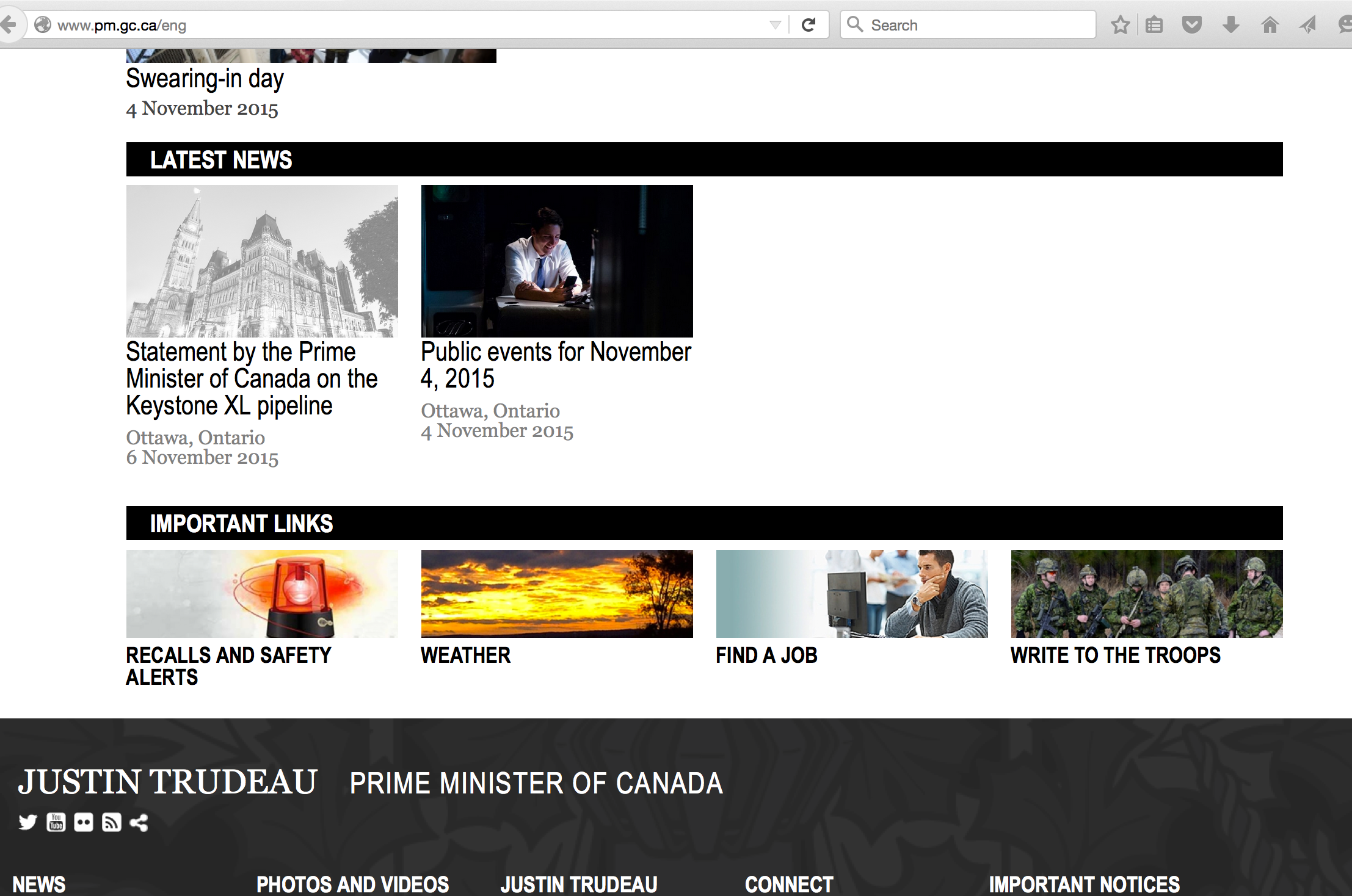 Which is actually probably not a bad top four, given what people care about and the time of year.

Digging a little deeper, I had no idea that there were Canadian soldiers involved in so many overseas missions:

It also seems to me that Justin Trudeau emphasizes his support and mention of Canadian Soldiers, perhaps to defray the (generally incorrect) notion that Conservative governments are better for the military. But perhaps this is just me being oversensitive.

”
“It’s the responsibility of government not to put soldiers into harm’s way except as a last resort, when it’s absolutely necessary to do so,” he said. “When we do send them into harm’s way we have to ensure that we’ve done everything in our power to find other methods to reach our objectives.”
”
http://www.nationalobserver.com/2015/11/04/opinion/you-have-no-idea-how-badass-trudeaus-defence-minister-really

It was an interesting campaign. People seem to always talk about the length of it, but my favourite article talked about how it allowed each of the issues to come out one at a time, and actually receive some due consideration.

It felt at the start of the campaign that it was Mulcair’s election to lose. It felt like for whatever reason he didn’t seem to connect well with the electorate, definitely not like Jack Layton had been able to. Interestingly, it felt (at least from the few speeches I heard) like Justin Trudeau was the spiritual successor to Jack’s legacy, at least in the triumph of hope and science over fear.

There were also comments about ‘strategic voting’…My definition of strategic voting is for the rational voter to look at the possible outcomes, rank order them by desirability, and choose one of the choices they have within their power to push things along that track as far as possible. In Canada, this generally currently seems to mean voting for the person most likely to defeat the Conservative candidate in their riding. In Alberta, that’s probably a Liberal candidate, downtown*, much more likely an NDP candidate.

*I originally put ‘Quebec’ here, but that was before I saw this: https://en.wikipedia.org/wiki/File:Canada_2015_Federal_Election.svg, which shows the Liberal party with a plurality of votes and majority of seats in Quebec in 2015.

**There is a secondary, more subtle option here, which only takes place when there’s a minority. After the 2008 election, the Conservatives were able to control parliament with only 124 out of 308 seats. Had the Liberals or NDP had all of the 132 seats between them, there would not have been the constitutional crisis of 2008-9: https://en.wikipedia.org/wiki/2008%E2%80%9309_Canadian_parliamentary_dispute Recently, it seems that the party with the most seats governs, and there do not seem to be stable coalitions between the 2nd and 3rd parties. This may have been a result of the Bloc Quebecois.

Interestingly, coalition governments seem to be much less common than one might think… This article suggests it may be because the leader of the party is no longer elected by backbenchers:
https://en.wikipedia.org/wiki/Coalition_government#Canada