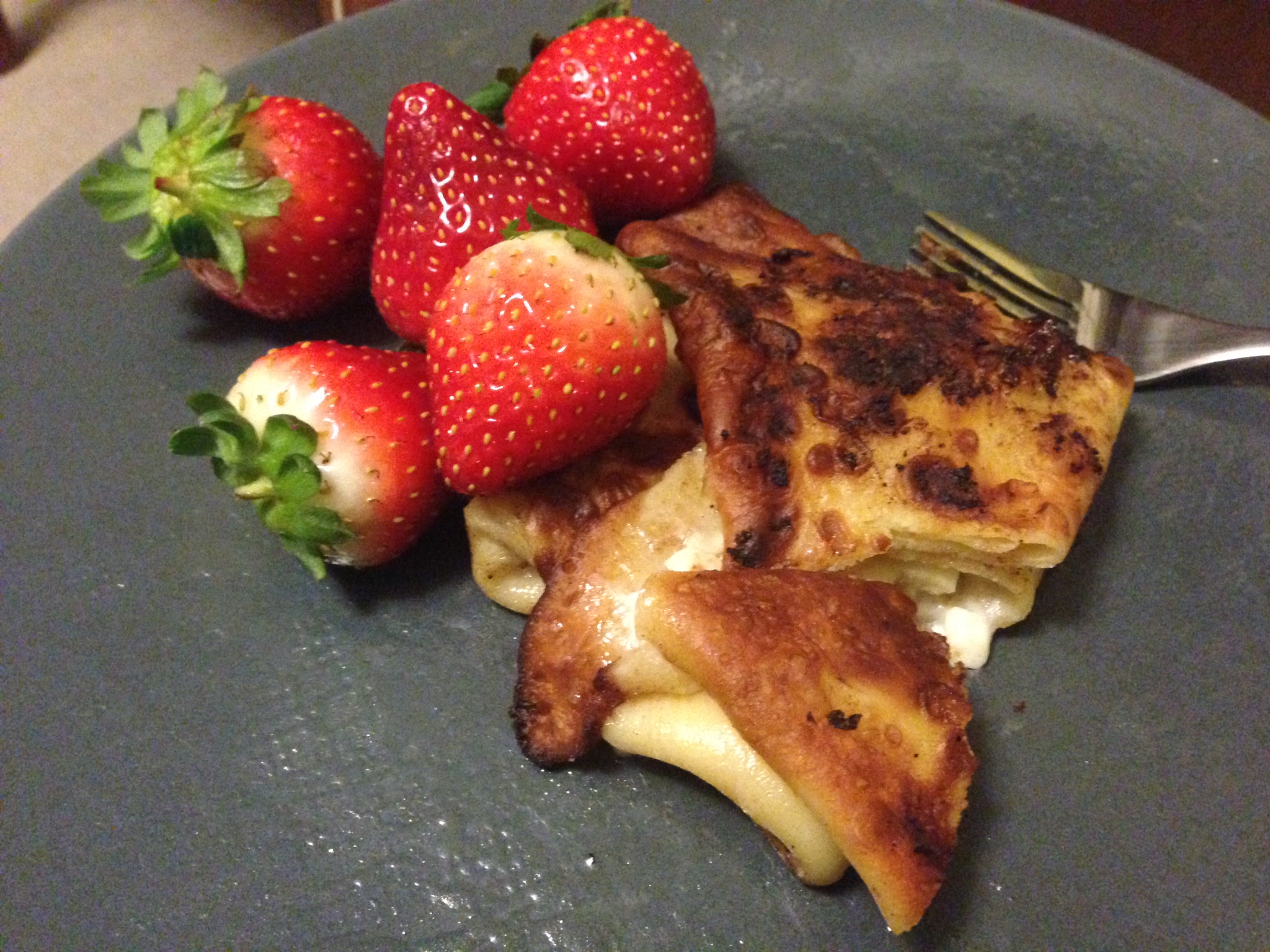 So, last year I made Nalysnyky* for Orthodox Ukranian Christmas**, based on an excellent (and very forgiving!) recipe provided by Tori Avery here:

I made a few changes to the recipe for various reasons, and I figured I’d copy it below.

Basically, Nalysnyky and Blintzes are some sort of filling wrapped in a crêpe. I chose cottage cheese*** instead of the Ricotta and Creme cheese suggested by the original recipe. My proportions may be a little different, as well. I feel like there’s something slightly missing in the filling, but I’m not sure what it is. They were still a hit at Christmas dinner last year and this year. (Last year, S and I made ourselves sick eating them, but they were oh so tasty. 😀 ) Both last year and this year, I made a double batch. IIRC, this makes 15-18 blintzes, more than enough to satisfy 7 and leave many left over for snacks.

This is a very forgiving recipe. You mix things in a bowl, the exact proportions don’t really matter, and you can pause partway through and nothing much will go wrong (assuming nothing is actively burning in your frying pan). The first time I made them, I had long pauses between steps (as it was my first time doing a new recipe in a long time), the second time, I only used a timer about 1/3 of the time, trusting in my ability to read butter cooking temperature (browns and crackles at 375 F), and how well done a crepe was.

Cooking utensils:
– Measuring cups
– Whisk and a lot of patience, or a blender or mixer capable of dispersing flour clumps from solution
– Frying pan (non-stick is better)
– Plates to store partially made crêpes
– Wax paper to put between crepes so that they do not stick to each other (essential if you’re saving time by only cooking one side of the crêpe to start
– Plates and paper towel to de-butter and store freshly cooked

Thinking about it, if you wanted to do this assembly-line style, you could have two frying pans on the go, one making the shells, one frying the results.

Cooking requirements
– 1-2 sticks of butter (I used two full sticks for a double batch. About 85% to cook the crêpes and the rest to fry the filled crêpes.)

You could also use whatever oil suits you. We used olive oil the first time we made them, to good effect.

1) Mix all the crêpe shell ingredients in a mixing bowl.
2) Stir these ingredients until no flour lumps remain. (I couldn’t get them all out, but they still ended up fine. You’ll get better consistency if you do this step more assiduously.)
3) While stirring, turn on your frying pan/skillet to 375F. (On our stove, this is 2.5 stops below half, but really, it’s wherever butter browns but doesn’t burn. I learned this from many years of making pancakes growing up, YMMV.)
4) Apply enough butter to the bottom of the frying pan/skillet to make a thin layer for cooking. You can tell by the fact that it is sizzling and slightly browning and coating the bottom of the pan.
5) Pour 1/3 cup of crêpe shell mix onto the frying pan/skillet, then add a bit more, perhaps up to 1/2 cup (this will make the shell slightly larger and easier to fit filling into
6) Wait 60-75 seconds (I set my microwave timer for 55***** seconds), or until the crêpe can be flipped without displacing uncooked liquid on its top (If you wish, you don’t need to cook both sides of the crêpe at this stage, you can cook the inside, add the filling, then cook the outside later, which may save you 15-30 mins, if you’re really organized).
7) While this is cooking, take a sheet of wax paper, and get it ready to receive the crêpe.
8) Flip the crêpe, and cook the other side for 60-75s.
9) Take the crêpe off the frying pan and place it on the holding plate and/or wax paper

10) Repeat steps 4-9 until all the crêpe batter is exhausted.

11) While you are cooking the crêpes, you can mix up the crêpe filling:
12) Stir the filling ingredients in a mixing bowl. You may want to add different amounts than above, to taste.

13) Put a small amount (one spoon’s worth) of the filling onto the lower middle of one of the crêpes. Fold the bottom part of the crepe over the middle, then each of the sides in, then fold the bottom ‘pocket’ up until the crêpe is rolled up like a burrito around the filling.

14) Melt about 1/3 of a stick of butter into the pan (this should be enough to cover the bottom of the pan…Add more if you want to brown more of the nalysnyky during frying).

17) Dry the excess butter onto a paper towel

18) Serve warm, with fruit, or whatever other garnish you wish!

***It might have been this page, or another, which suggested the substitution: http://allrecipes.com/recipe/212387/cottage-cheese-blintzes/